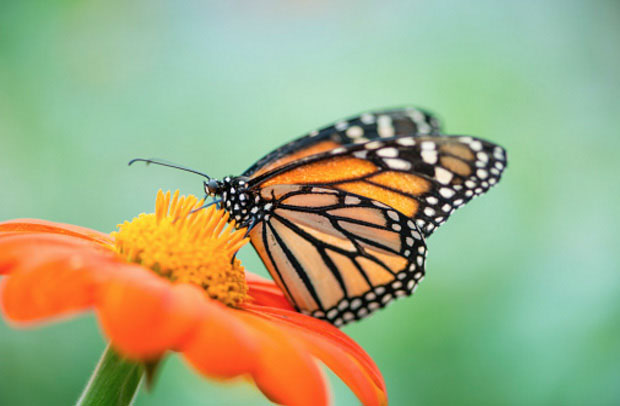 The monarch butterfly is commonly confused with the similar-looking viceroy butterfly. The monarch is larger, with a wingspan that ranges from 8.9 to 10.2 centimeters (3.5–4.0 in) while the wingspan of the smaller viceroy is between 5.3 to 8.1 centimeters (2.1–3.2 in). In the monarch butterfly, the upper sides of the wings are tawny-orange, the veins and margins are black, and in the margins are two series of small white spots. Like the viceroy, monarch forewings have a few orange spots near their tips and wing undersides are similar, but the tips of forewings and hindwings are yellow-brown instead of tawny-orange and the white spots are larger. Apart from their smaller size, viceroy butterflies can be distinguished from monarchs by the postmedian black line that runs across the veins on the hindwing.

The Monarch Butterfly (Danaus plexippus) is a migratory species in North America,

that travels each year along two migratory routes. In the eastern migration, the butterflies fly northeast from overwintering grounds in Mexico’s oyamel fir forests in central Mexico to breeding habitat in northern Mexico, the midwestern United States and southern Canada during the spring and then fly south during their fall migration.

From western regions (west of the Rocky Mountains), smaller populations migrate to and overwinter along the California coast.

During this unique migratory phenomenon, which takes place over multiple generations, the monarch butterfly requires milkweed (Asclepias sp.) as breeding habitat as well as nectar plants on which to feed.

In agricultural areas, much of the breeding and feeding habitat has been lost, and conservation efforts targeting the creation, restoration or enhancement of this habitat in agricultural lands have great conservation potential for monarchs.

The egg is the first stage in a monarch’s life. In the wild, a female monarch can lay 300 to 400 eggs in few weeks. Eggs develop into caterpillars (larvae) that feed exclusively on milkweed. The caterpillars grow quickly; in 9 to 15 days, their mass increases by up to 2,700 times. Caterpillars undergo five successive moults, or instars (also called larval stages).

Caterpillars usually leave the milkweed plant during the fifth instar to go in search of a well-camouflaged spot high off the ground, where they can pupate. They are referred to as pupa (chrysalis) once they extract themselves from their caterpillar skeleton. After 8 to 15 days, the adult butterfly emerges from the pupa case, and is ready to reproduce. Once fertilized, the female heads off in search of milkweed plants to lay her eggs. (Adapted from Mission monarch).